To share your memory on the wall of Ruby Smith, sign in using one of the following options:

Ruby was born Friday, August 24, 1934 in Dunlap, Tennessee, she was the daughter of the... Read More
Ruby Lucille Smith, age 84 of Spencer, Tennessee passed from this life on Sunday, June 23, 2019, at Life Care Center of Sparta in Sparta, Tennessee.

Ruby was born Friday, August 24, 1934 in Dunlap, Tennessee, she was the daughter of the late Rubin Stinnett and the late Susan Russell Stinnett.

A Funeral service will be at 11:00 AM on Wednesday at Spencer Funeral Home with Wayne Sullivan officiating. Interment will be in Spencer Town Cemetery, Spencer, TN.

Online condolences may be made to the family at spencerfuneralhome.net
Read Less

To send flowers to the family or plant a tree in memory of Ruby Lucille Smith, please visit our Heartfelt Sympathies Store.

Receive notifications about information and event scheduling for Ruby

We encourage you to share your most beloved memories of Ruby here, so that the family and other loved ones can always see it. You can upload cherished photographs, or share your favorite stories, and can even comment on those shared by others.

Posted Jun 24, 2019 at 04:37pm
I only had the pleasure of knowing Ruby for about a year as we were introduced by her granddaughter, Trudy Smith, whom we employ. Trudy always took Tuesdays off in order to spend time with her grandmother, occasionally bringing her by the store to visit. She always had a sparkle in her eyes and wore her sequined or rhinestone hats that became her timeless accessory. It was obvious that Trudy was a favorite and that she brought her much joy and good times. She will be greatly missed by Trudy and many others in the family.
Comment Share
Share via: 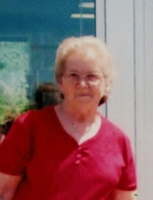